Are you being served?

Disclaimer: No further mention will be made of Mrs Slocombe, Mr Humphries or Mr Grainger, in this post.

We moved out of the house for a few days this week … the floors were being sanded and polished. The holidays have been less of a relaxed holiday-like break and more of a time filled with frantic activity all directed towards “getting this house on the market”.

We’d spent a few days lifting the lino in the kitchen and dining area, and while the carpet had been done months ago and with great ease and speed – the lino proved to be a more challenging task, made all the more challenging by one of the main workers succumbing to a back injury – yes, I speak of myself, of course. And yes of course, the events surrounding it were as always somewhat amusing.
Day 1 of the lino lifting was Saturday – we (2 adults and 2 children) did the dining area relatively easily. By Saturday evening my back was a little stiff as expected. So Sunday involved rest – as it should and Nurofen. Nurofen sets a vicious cycle in motion, while it’s great for reducing inflammation, it increases asthma symptoms which produce more coughing which hurts the back which then requires more Nurofen and so on ….

So Monday we still had the kitchen to do but it was going to be a quick job if Saturday was anything to go on.

It turns out that Saturday wasn’t anything to go on. We’d saved the best ’til last and by best I mean worst. So Dad was around to help, he and the long-suffering husband had emptied the “to be polished” areas of all the furniture and we were on the home stretch. I’d been banned from lifting anything. I don’t enjoy bans, I don’t enjoy not being able to help, I don’t enjoy being told what to do … so the situation was ripe for a lesson for Anne.

I decided to demonstrate to my dad just how easy it had been to pull the lino out from under the back of the kitchen bench between the kitchen and the dining area, by doing the same with the lino that appeared to be under the edge of the pantry. And so, in true Anne style, I explained out how easy it was – then demonstrated, it must be the teacher in me. The unfortunate thing was that the lino was not just under the edge of the pantry but in fact the pantry and indeed the majority of the kitchen had been installed on top of the lino/masonite/horrible glue and paper concoction. So as I pulled on the lino, willing it to give way, my back did its thing.. there’s a dull tearing kind of feeling that happens in the area when I do the wrong thing. And no I’m not referring to the lino..though the lino did give way too, just not in the way I’d expected it would. 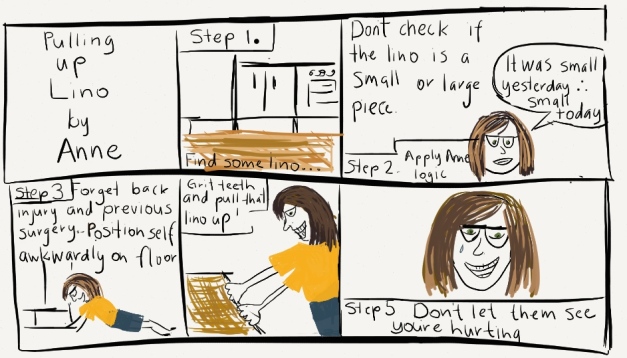 There’s no mistaking that some damage has been done…while there was no blinding pain or lightning flashes,  my expression gave me away.

One of the problems with having a “transparent” face, as mine apparently is , is that my thoughts are generally easily read as they fly unguarded across my face. If you say something to me that disgusts me it will be clear by the look on my face, if you voice an opinion – my approval or disapproval will register on my face. Not really helpful when you are trying to be stoic and tolerant. At any rate those who know me, saw pain and horror on my face and then it was time for me to do those things I tend to despise – go and rest, stop helping and worst of all – let others do things for me.

Someone told me several years ago that part of being a servant is to let others serve you – to allow others the opportunity to be a servant also. When I say someone told me, what I mean is I was admonished rather loudly by a co-worker who was trying to help me, “You have to let people help you!!”  And she was right.

So on Monday I did as I was told, eventually, and went and lay down with the heat pack and the Nurofen. I even watched a movie as instructed …guiltily, I might add.

For some reason some of us don’t like “not doing things” – we feel guilty. I feel extra guilty when I’m in bed with a bad back because other people have to do more work because of me. I get very annoyed with myself for having done something stupid like injuring myself. Because if I had listened to the voices of reason around me I was meant to be resting anyway but of course I thought I’d recovered sufficiently to be useful and surprisingly I was wrong!! So then I apologise constantly, which I’m told can be quite annoying because no one is under the impression I’ve injured myself intentionally. Then I feel bad asking for help or things I need. It doesn’t make sense really. It can’t be entirely because of the perfectionist tendency that questions if this person will do the job/task “right” ..or if I’ll have to redo it later. There’s someone I know who refolds the washing sometimes when someone else has helped and folded it in a different way… it’s sick really… who really cares how a t-shirt is folded? Does it really matter that much if the washing is on the line the “wrong” way round? No it doesn’t. What’s the wrong way anyway?

Something about letting people serve you means that you/I have to allow others to serve in their way. I’m not good at that because not only am I a bit of a perfectionist, but I’m a bit independent (I was dubbed “Miss Independent” in the past), and I’m a bit impatient too… and maybe, just maybe, I’m also a bit of a control freak?

It’s great if you are serving – but are you also being served? Because if you aren’t, you’re preventing others from being a servant.

PS – We’re back home, I have recovered enough to be permitted to clean the walls ! I’m not permitted to lift any furniture…and I’m listening! Also the floor looks amazing! 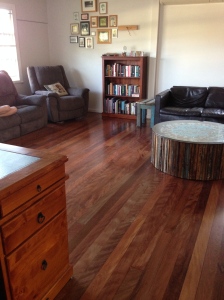