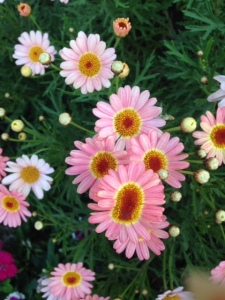 Max Lucado writes about them…

Sometimes he calls them joy stealers – people who steal petals from your joy daisies.

We all know them – they are people whose sole purpose appears to be to remove the joy from your life.
Of course this is not the case, very little of their life is about others, in fact to suggest that they exist to steal your joy is giving them a little too much credit. They don’t actually care – they aren’t sitting around plotting ways to get at you, they are just doing their thing. If the truth be told you don’t even rate a second thought most days.
People like me however spend far too much time assessing the motives of these joy stealers – once again perhaps giving them a little too much credit.
Today’s post is a bit of a venting session which began close to a week ago.

Earlier this week my boy was out for part of the day with his other family. It was a public holiday, in our time .. funny how possessive people (I) can become about time … an abstraction. After some negotiation the agreement was made and I requested that he be returned at about 3pm in order for the family here to have some time together, since we never have a weekend together. I started writing this at 5:10pm – he wasn’t back and my imagination was running wild with the things I could do – the things I could say … because that would help things, wouldn’t it!! He came back at 5:38 which was plenty of time for me to think of a number of things I could say, ways I could act to get my own back and enough time for me to realise that writing about it might give me some perspective – it did.

Andy Stanley has/had a number of interesting questions he used to ask his children at night – I heard about in a series of sermons of his called It Came From Within. He may have also written about it in his book of the same name. I’ve tried to remember them over the years, but let’s be honest they only come to me after I’ve blown it – or spent too much time mulling things over.

Is everything ok in your heart?
Are you mad at anybody?
Did anybody hurt your feelings today?
Did anybody break a promise to you today?
Is there anything you need to tell me?
Are you worried about anything?
Whose failure would you secretly celebrate?
Did you have any have long imaginary conversations with any one?

That last one is the one that gets me – as I spend too much time rehearsing the perfect zinger of a line that puts that petal stealer right back into their box.

Fortunately He that is in me in greater, thankfully Christ has begun a work in me that He will bring to completion which will result in me being less like me and more like Him. Thankfully the fruit of the spirit is Love, Joy, Peace, Patience, Kindness, Goodness, Gentleness, Faithfulness and Self-Control, not too many of these come naturally to most of us – certainly not to me.
If we were going to list off the fruit of Anne we’d be looking at Anger, Revenge, Pettiness, Jealousy, an unforgiving attitude … to name a few.

A large number of you have people in your lives who seem to be there to create the perfect conditions for the fruit of the spirit to flourish. This is the way we need to view them – not as joy stealers but as fruit growers or fertiliser (I find this helps when they are really annoying me). I learnt this not through experience of my own but through a conversation I was once part of. A friend had been asked how she was – she then explained the current situation she was in in which she was working with very difficult people. The lady who’d inquired said – “Isn’t that wonderful that you have been given this opportunity to grow”. It wasn’t a flippant Pollyanna-type comment that I would have been all too happy to dismiss. It was a statement made by a woman who has lived difficult situations and has learned that there are two ways to do this.
She has learned that you have a choice to act one of two ways when petal stealers arrive on the scene. One way is to focus on the petal stealers, the other is to focus on the creator of the petals and your relationship with Him. One way comes naturally – an eye for an eye, treat others as they have treated you – the other way is the counter-culture way that Jesus demonstrated for us.

One final thought that occurred to me is that if the joy that you and I have is so shallow that a person saying something bad about you or me, or taking advantage of your gracious spirit, is enough for it to vanish – isn’t coming from the right place. I’d suggest that it’s not real joy and it’s not coming from the source of joy. I think it might just be happiness, and let’s be honest, happiness is fleeting. We’ve been conditioned to pursue happiness but it’s not lasting and that’s why you can never get enough. That’s what advertisers target, happiness – rarely do they try to bottle joy and sell it to us. That’s because it exists deep below the surface in a place that can’t be touched. Joy is deeper, I’ve wondered on a few occasions if the reason why I still I get annoyed by these things is because God is pointing out to me that I’m looking for happiness rather than joy. I’m not resting properly in the source of joy.

“Safety and happiness can only come from individuals, classes, and nations being honest and fair and kind to each other.” CS Lewis, The Case for Christianity

And really that’s not where we live, or even how we live.

“Joy is the serious business of Heaven.” CS Lewis, Letters to Malcolm

So it’s joy that is to be pursued, maybe happiness is found in one daisy and joy is found in a daily supply of fresh daisies as Max Lucado suggests.

Maybe the problem isn’t so much the petal stealers, as it is me… I need to learn that I can let people pull my petals off after all I have an endless supply of daises.