This one is for you, if right now you are facing some dark days – it might be that you are at the end of your marriage. You’ve done what you can and now you don’t know what to do.

As you may know we, him and me are kind of well equipped to talk about this one. We’ve both had that day when all of a sudden the road before takes an unexpected turn.
For me, that day was over nine years ago now, for him about seven years. A great deal of water has passed under the bridge since then, but it is a day that you won’t forget. It’s not that I haven’t healed, but it was the point of my life when I can honestly say I began heading to where I am now. When your marriage ends there are a number of things you struggle with. One of the biggest is grief.

C.S Lewis, in A Grief Observed, explores grief after the death of his dear wife Joy. And while you, dear one, aren’t coping with the death of a loved one, you are dealing with something that is akin to it. You are dealing with the grief that comes with the loss of the life you have been living up to this point.
I’m not suggesting they are the same, it is different, but there are elements that are similar.

Getting over it so soon? But the words are ambiguous. To say the patient is getting over it after an operation for appendicitis is one thing; after he’s had his leg off is quite another. After that operation either the wounded stump heals or the man dies. If it heals, the fierce, continuous pain will stop. Presently he’ll get back his strength and be able to stump about on his wooden leg. He has ‘got over it.’ But he will probably have recurrent pains in the stump all his life, and perhaps pretty bad ones; and he will always be a one-legged man. There will be hardly any moment when he forgets it. Bathing, dressing, sitting down and getting up again, even lying in bed, will all be different. His whole way of life will be changed. All sorts of pleasures and activities that he once took for granted will have to be simply written off. Duties too. At present I am learning to get about on crutches. Perhaps I shall presently be given a wooden leg. But I shall never be a biped again.

You will be different now as a result of this.
Your life and the lives of your children will be altered because of this.
As a family you will become different people because of the loss that has touched you. This does not have to be a change for the worst though. Why? Because we know that God works all things for the good of those who love Him. Even in this.

The biggest things I struggled with in the months following were;
A sense of having lost my direction …
A sense of no longer knowing who I was …
A sense of fear and anxiety about an uncertain future …
And above all, not knowing how to pray through all of this …

Today my friend asked me: “What did you do, what did you pray for, how did you pray?”
Well, to be perfectly honest, I didn’t know what to pray. I did know that God could hear the cries of my heart, and the pain I was in, but as for what I prayed, I don’t know that I did. I know He saw my tears, I know that at this point in my journey, the Spirit made intercession for me with groaning that could not be uttered. I do believe that when one is in this depth of pain and anguish – our hearts cry out to Him and at that point we are, perhaps, the closest to Him that we’ve ever been.

Perhaps the greatest blessing I was aware of at that time was the prayer that was made by others on my behalf. To you, our friends, in this spot right now, know that you are in our prayers daily.

I honestly didn’t know what to pray, sometimes it felt as though I’d forgotten how to, there were things I thought I should be praying for that I didn’t want to. I don’t want to pray the wrong thing. I do know a great number of people prayed for me. I do know that those prayers carried me through day after day – those prayers carried me through some very dark days. I was aware of it. I felt supported – sometimes literally.
I know some of those people praying for me saw their prayers answered and others saw their’s go unanswered. Some prayed for reconciliation, some prayed for repentance, some prayed for restoration, some prayed for how this affected them. Others prayed that I would know God’s presence with me, God’s peace, His protection and His guidance – others prayed the prayer that I pray for you. The prayer was that God would bring my will in line with His own and that I would seek Him first, that He would be my all.

And this my friend is a little lesson for us I think. Sometimes God will give us what we want and we more often than not, learn the hard way that what we want is not what is best.
Other times God gives us what He wants – and that is always what is best.

When I lay these questions before God I get no answer.
But a rather special sort of ‘No answer.’
It is not the locked door.
It is more like a silent, certainly not uncompassionate, gaze.
As though He shook His head not in refusal but waiving the question.
Like, ‘Peace, child; you don’t understand.’

I know right now though you don’t see that… but maybe that’s because we have a different understanding of what best means… to God best means that we are more and more like His Son. He knows that what is best for us is that we are reflections of His Son – He knows that we will only ever be at our best when we are close to Him.

The best is perhaps what we understand the least.

So friends, our prayer for you is that God will bring your will in line with His own. That in so doing He will reveal to you His will, His best for you. 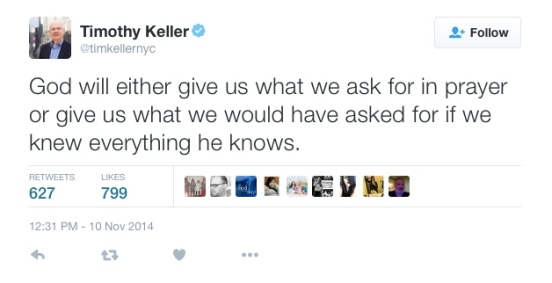 Some Timothy Keller to close on because in my experience wherever Mr C.S. Lewis is, Mr T. Keller isn’t too far behind.

This entry was posted in Uncategorized and tagged Christian living, prayer. Bookmark the permalink.