The freedom of self forgetfulness …

I’m not sure how to do this, obviously, I just started with a personal pronoun.

Now my testimony, the story of my conversion, is one that I’ve always found rather a dull one. Raised in a Christian family, I learned all the Sunday School choruses, recited all the memory verses… and one day I realised I needed a Saviour .. Don’t get me wrong I am very happy about the fact that this is my story, but it’s not really one of those edge of your seat, what happened next kind of tale, that leads people to God.

So I decided to focus on my testimony of the past decade, having just turned 40, what better time to take a good look back at what I’ve left behind and where I’ve been? Now that’s more of an edge of your seat kind of story!

I prepared … I stressed … I worried … I fretted … I scolded myself for not starting my preparation sooner… as a teacher would scold her procrastinating students, (yes, I see the irony.)

Personal pronoun count = 27  for those of you playing along at home!

I presented the tale of the past ten years.. I think I talked too long. I tried not to go into all the gory details of the end of my first marriage.. I think I mentioned enough for everyone to see the edge of your seat potential. I finished and some very supportive people said it had gone well. I thanked them – wondering what was wrong with them. As this blog’s title suggests I do have some issues with compliments, praise and the concept of “good enough” or having done anything well.

We all had a lovely evening – I got home and headed off to bed … at which point the slight anxiety I’d been feeling, began to grow.

Had I said enough? Enough about you – sure!!
Had I said too much or not enough? Yep, probably – and it’s out there now, wherever “there” is!
Had I accidentally insulted anyone? Let’s assume the answer is yes.
Had I pointed to God? Not nearly enough – you focused on you as though everyone had been drawn there to hear all about you..
Had I recognised HIs part in this? Yeah, you tried, but you weren’t very eloquent, it probably wasn’t clear. Remember no one else knew what you were planning on saying – they just heard what came out of your mouth … you probably did your usual thing where you think you’ve told a complete story but you’ve only told half of it, the rest is still in your head.
Had I embarrassed Him? Well, He’s God so He won’t be embarrassed by you.
Had I embarrassed myself? Well, yes of course – don’t you always?
Did anyone go away more confused about the life of a Christian than they had started out? Probably, they probably wont ever come back to church now because of the unclear, confusing speaker they heard that one time. I’m referring to you …

That was really only the beginning – I woke up multiple times during the night with a feeling that I’d done something wrong. The questions became statements and I was a goner. I was, in the middle of the night, standing in the courtroom, being cross examined by the accuser.
You looked like a complete fraud, a fake.
Such a quick look at your life – you came out looking like Pollyanna, no one wants Pollyanna Christianity.
You didn’t spend much time talking about God – did you? It was mostly about yourself. Is that what your testimony is about? You?
In fact I think people would look at your life and wonder why on earth become a Christian if I’m going to turn out like you…

I did drift in and out of sleep – the morning came and the wonderful man at my side read our devotional and prayed and I felt much better once again. In the cold light of day after some prayer things are always better.

Then we headed off to church – where it was luncheon – I didn’t manage to get it together to bring food – again! But we stayed anyway – baby steps! People were positive about the previous evening and even I had to recognise that it had been a lovely evening.

The problem with all of this is that I have felt as though I’ve failed…everyone. I ask myself what success would have looked like – I have no answer. I think it’s a bit of the imposter syndrome, the perfectionism, the act of thinking so little of yourself that it becomes false humility, the introverted personality all combined.

I’ve heard about it a few times now… I think it’s something I need to look into.

I want to be able to say as my husband often encourages me to, when I’m being far too reflective for his, or anyone else’s liking… 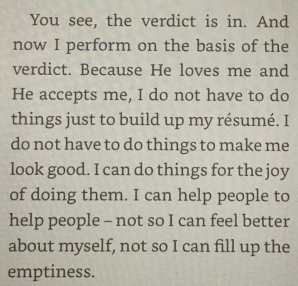 So tonight this is heading out without regret, second guessing or worry. 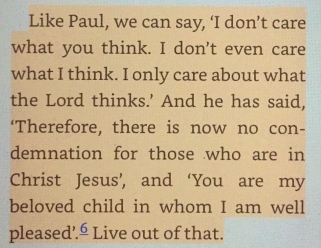 It’s time to read, and live in, The Freedom of Self Forgetfulness.(read  or listen )

This entry was posted in Uncategorized and tagged Christian living, fear of failure, perfectionism. Bookmark the permalink.