Sometimes, you just have to look back and see what God has brought you through in order to step up and do the next thing.

I guess that’s why we are encouraged to share our stories – not to boast about how well we’ve done but to encourage others to see the amazing goodness of God, His unfailing faithfulness and the ways His strength is made perfect in our own weaknesses. Joshua 4 – shows us a very real concrete application of this. Prior to crossing the Jordan, the children of Israel were commanded to:

“Take for yourselves twelve stones from here, out of the midst of the Jordan, from the place where the priests’ feet stood firm. You shall carry them over with you and leave them in the lodging place where you lodge tonight.’ ”

We, all of us, who belong to Him have stones we should have gathered from moments when God allowed us to walk on dry ground in situations that would have, but for Him and His presence, overwhelmed us.

He’s off to hospital again today for the next few days. The next test in the series to uncover the source of the Primary Aldosteronism. Yes, those of you who know our complicated timetable will have worked out that these are our only child-free days of the holidays, and yes, he’s in hospital for them … yay!!!
I didn’t want to do the five days without him last time – I really don’t want to do the two days this time.
He’s packed Finding Peace by Charles Stanley … and I’m right now, dealing with some palpitations. Why, I’m not sure. But I’m feeling really anxious about it this time – and I’m not sure why.

This is not the biggest thing either of us has ever been through – it’s not even the biggest thing we’ve been through together but it’s the now thing – and therein lies the problem.
It’s not my choice for now. My choice for now is for us to actually have two days, just him and me. Selfish? Maybe. I know that we’ll get our time some other way at some time other than now.

For now I feel a little overwhelmed – he does too – neither of us is super keen on the time apart. I guess if we continue to focus on how we feel then it’s not going to be a great outcome for either of us. I’ll be miserable and I might just make everyone around me miserable too add to that the fact that I’m a little inclined to dig my heels in if I have to do something I don’t want to do.
Right now my mother and father, are probably reliving the highlights of my first year at school, either the screaming filled immunisations before school or the weeks when I had to be extricated from the post under the year one building because I’d decided I’d had enough of school. But I guess we can look back and see that five year-old Anne got through another few years of schooling without ill effects, some would even say it was beneficial. And the horror of the immunisations became a distant memory when in the same year at the age of six she was in hospital having an emergency appendectomy.

I know those were kind of amusing examples and you and I both know darker days have been and gone, and so for now it’s time to look back. To look at the way in which the Lord has brought us through deeper and darker waters than these before. Time to examine the stones that we’ve brought out of those times – and time to remember.

Yes, it’s time to get in the car and head off again.

And before I go – what are your stones? What are the things that you can look back on that give you strength for the difficulties ahead? 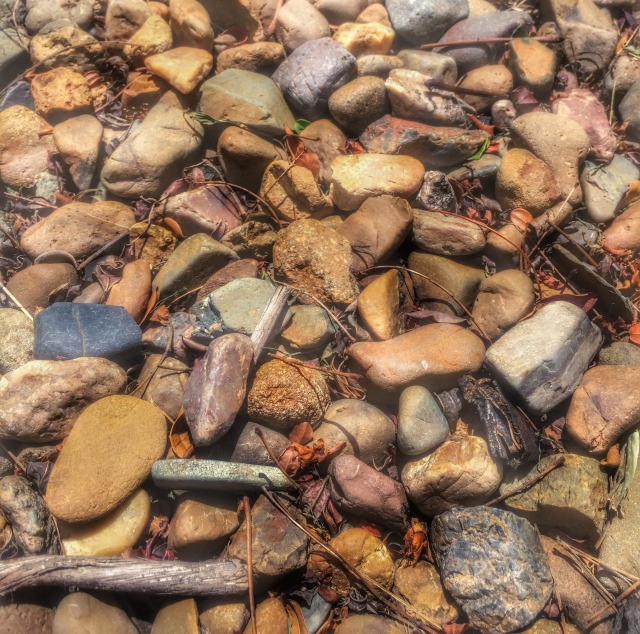