Perhaps it’s because teacher me is marking and drafting at the moment or perhaps it’s because I’ve reached the time of year when my focus on things turns towards the hyper – but I’ve been thinking about the difference between waiting on and waiting in. What follows should not be considered a foray into some unchartered area of lexical discovery, nor should it be considered of academic value – it’s just one of the things I’ve been thinking.

The Christian life is one of waiting in God.

While waiting on God is what we are told to do, I’ve been thinking the way some of us talk about “waiting on God” seems a little passive. It sounds a bit more like wishful thinking. It often relates to the things we want … I think it rolls off the tongue too easily.  Comments like, “Oh well we’re waiting on God” are so often repeated and heard that they begin to sound a little empty, like platitudes. It’s difficult not to hear a bit of a negative tone to it – almost as though God is falling behind my plans – His timing is a little slack on this “thing” … and I’m waiting for Him to catch up with me.

Waiting in God conjures the imagery of being surrounded by Him, the visual of being so close and so completely enveloped that neither of you has fallen behind the other. One is, in fact, carrying the other through the storms, trials, sorrows, and joys of life. The two are bound together, one is abiding in the other. In John 15 – there are some fairly clear guidelines regarding the life of a Christian – Abiding in the vine …. that has somewhat informed my thoughts around this idea – on the vine is something a passing beetle might do for a period of time.

Waiting in God through circumstances requires trust, you need to know Him to wait in Him. You need to know something about who He is,  and also something about who you are. It’s not possible to wait in someone, who you feel is inferior to you, and as long as you think God owes you something or God needs to work according to your time frame; whether or not you want to admit it, you view Him as inferior to you.  You won’t wait in someone who you feel has let you down, someone who has failed you, someone who is at your beck and call – that’s someone who is easier to wait on than wait in.

One more thing I have realised is when I am waiting in Him, the enemy can still take shots at me. In fact, you can guarantee the shots will keep coming. If I am in Him the shots aimed at me are absorbed by One who is greater. And maybe if they are really getting to me, I’m on the outside, like a passing beetle, instead of being inside — a member of the family. 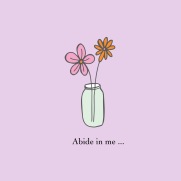 Maybe all I’m suggesting is that as we wait on Him, which we all do, those times afford us the opportunity to examine ourselves as to whether we are also waiting in Him.